UnNews:Coprophagic hipster ate his own poop before it went all mainstream 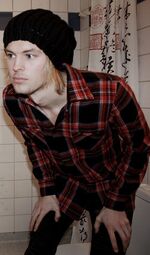 Jenkins, pictured in preparation to eat his own excrement.

SAN FRANCISCO, California -- Chad Jenkins, a 24-year-old parking attendant and self-proclaimed "hipster," suffers from coprophagic pica, a psychological disorder that compels him to eat his own feces. Coprophagic pica is rare, having been observed in a tiny fraction of a percent of the population.

However, Jenkins is upset that the practice has become "all mainstream and shit."

"You know, I was eating my own shit back in the 1990s, before anyone had even heard of people who do that," explains Jenkins. "Nowadays, it's like, guys are taking a dump in their hands and eating it just because they think chicks will think it's cool. It's like they're fucking sellouts, you know?"

"Back in the 1990s, eating your own shit was real, man," continues Jenkins, pausing briefly to remove a small brown sphere from a bag in his pocket and take a bite, washing it down with a swig of Pabst Blue Ribbon. "Now it's like, just because you saw that on TV or heard about it on corporate radio or on a Fisher Price commercial, you think it's all edgy. Fucking poseurs!!"

Jenkins concludes by asserting that he was a fan of ska before it went all mainstream, as well.