Although 6 years have passed since the Assualt and Firearms Bill created in the 80's has expired (Allowing for the sale of such Assualt Rifle firearms and Rapid fire weapons as the: AK-47 and M-16 Assualt Rifles), it has only recently come under fire from critics as being "maybe a tad too powerfull" and even "not something for hunting quail". The U.S. Congressmen of the United States Senate have replied with the following Formal statement: 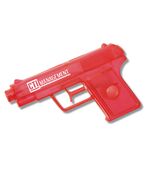 According to Congress, we need less of this on America's Roads...

and a little more of this.

"In our opinion the expiration of the Bill didn't come soon enough, for years we congressmen have had to deal with Anthrax filled letters, providing bush a rubber stamp for all of his bills, in addition to cutting the freedoms of Americans. However above all we have had to deal with the threat of Traffic Jams. I know that arguments have been made that state: "such guns are far too powerful for hunting, and can't be used for that purpose" Along with "Why should fully automatic weapons be allowed into anyman's hands?" The truth is quite bluntly, we are tired of American drivers like all other Americans are. The extra armor protection that cars provide can too often ruin the perfect pistol or hunting Rifle Shot, instead what we need are bullets and plenty of them. all for the following bastards on the road:

The American Rifle Association upon receiving news of this development formally signalled its support for this measure, and as one spectator witness "Put enough lead into the sky as to temporarily block out the sun."

In addition to the above statement congress has encouraged all American Drivers "To end that pain in the ass in the seat of that car next to you, and let anyone try to pass you with an Ak-47 in your hands."

A representitive of the Russian population of the east coast had this to say:

"We are in the believing that such a measure is for the safety and insurance of safety upon the roads of which we are driving here in the United States. It is also in the being of pridefull that all Russians now carry the gun of the motherland in all places, both in the public and in the place of private."

Congress following up on its statement has planned to create a formal U.S. Bureau entitled: "The United States Federal Bureau of Corpse and Car disposal". To first be used in Iraq and slowly transitioned into a more U.S. homeland based role in the disposal of the recent use of Assault Rifles. It is planned to be staffed primarily from the U.S. State of Kentuckistan and the forgotten area of the U.S. between California and New York.