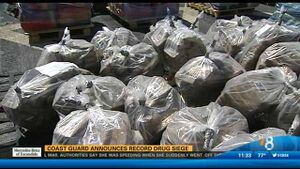 After 79 days trying to obtain world-class cocaine, the cutter Boutwell obviously produced more than its share of garbage needing disposal. These pizza boxes alone qualify as "hazardous waste," preventing the refuse from being dumped offshore.

SAN DIEGO, California -- The U.S. Coast Guard cutter Boutwell, carrying more than 14 tons of cocaine, returned to a naval base here on Thursday.

The $424 million haul arrived at Snow Station Zebra after an operation off the coast of Central and South America. Vice Admiral Charles Michel described the result of a 79-day operation as "some of the best shit I've ever tried." The operation also involved the U.S. Navy and the Royal Canadian Navy, or at least the boat that works the Pacific Ocean.

Adm. Michel said authorities scored 28 tons of cocaine, valued at $848 million on the street and slightly less on the base, in the past six months, more than the haul for the entire 2014 fiscal year. Adm. Michel said that the fiscal 2015 budget could be balanced through cocaine, and would at least seem to be balanced if enough cocaine were used.

U.S. tax policy makes the Coast Guard number two in cocaine deliveries, behind only organized crime. However, Adm. Michel said the service hopes to vault into the top spot, as the current series of raids apprehended over 100 smugglers. They will be redeployed at the Export-Import Bank and the Economic Development Administration, after a temporary stint at the IRS helping taxpayers who were unable to figure out Obama-care by last Wednesday's deadline.

The haul is destined for baseball ballparks across the nation. In addition to more in-stadium clocks than basketball has, new rules for 2015 to speed up the game force batters to remain in their "box." To encourage this, the white lines have been completely reformulated for the new season.

President Obama plans to hold a press conference at the White House and issue his official evaluation of the seized contraband, as soon as the medical staff verifies that his heart rate has returned to normal.