UnNews:City rabbits not as nice as country rabbits 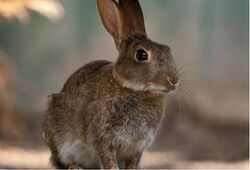 CAMBRIDGE, England -- Government gave assurances that social policy toward rabbits will have a firm new scientific footing, as a detailed academic study of tens of thousands of rabbit personality types was completed.

The work is part of a twenty year multi-billion pound BBC research project. Results just released show that wealthy city center rabbits are arrogant, and suburban rabbits are into wife swapping, while the sensible “hoppy valley” rabbits of the outer regions, tend to be right-wing bordering on racist. Country rabbits are a bit odd, insular and deformed.

The results were discussed in a press conference chaired by lead researcher Dr Rabbit, who moved over to the BBC after a stint on ITV advertising toothpaste. He was joined by Buster Baxter and Cecil Parsley, just two of 50,000 rabbits involved in the study.

Dr Rabbit said: “The study explores the neighbourhood clustering of the five basic personality traits defined by the classic five-factor model: openness to experience, extraversion, agreeableness, conscientiousness and emotional stability (or lack of neuroticism). We concluded, in the broadest terms, city-center rabbits are twats.”

Dr Rabbit went on to explain that the most conscientious rabbits can be found in the North of cities, herding around the economic hubs of emerging tech and creative industry. They tend to be into Apple technology and all-night parties.

Buster Baxter, who shares a trendy post-modern studio burrow with Duracell Bunny in North London, said: “This place is cooler than Jive Bunny on spinach. We talk terrestrial lagomorph colonies, aircraft laying cotton tails, where to “drop” the best recreational pellets – although we’re not into the pot. It’s also where my favourite rave magazine, Mixomotosis comes from,”

High levels of satisfaction with life – bordering on smugness – are concentrated in the leafier boroughs of the south-west of cities. These rabbits tend to be into doe swapping parties and speed-mating. Some of the well-known residents are the retired Peter Rabbit and Queen's equerry, White Rabbit; when he’s taking leave from Royal duties. They have a preference for rocket and avocado nut cluster salads over cabbage stalk.

The study showed the most congenial rabbits tend to congregate in the outer regions, with lower population densities and lower warren prices. There tend to be greater populations of older rabbits and families with kittens and more land areas devoted to allotments. They are the least adventurous with a strong right-wing political stance.

In rural areas the rabbit population is shy, often mildly deformed and difficult to understand. Once comfortable interaction is established, though, they are the most friendly; to the point of offering up their does to increase the gene pool. An exception to the rule was Cecil Parsley, a country rabbit from Cambridgeshire that has recently moved to the satellite town of Harlow.

Parsley said: “They call me the village idiot in Harlow, you know, but I have the last laugh, 'cos I live in a town.” When Parsley was asked what the carrot was that drew him to the Harlow, he said: “There wasn’t no carrot, my wife said I couldn’t get anythin' right, so I packed her bags and left.”

The study did find one constant; wild rabbit was just as delicious regardless of where it was shot.