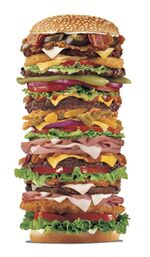 Underground bunker, Burma The Burmese Junta finally found a compromise that allows their dictatorship to remain in control although everybody else on the planet has arrived on the devastated coastline of Burma with food, shelter and other known causes of western civilization.

For the next three days, while international aid is finally accepted, a period of mourning will be strictly enforced by the ruling military, in addition to the spontaneous month-long fasting period already announced by the government. All good citizens are expected to be remain sad even as they witness soldiers methodically loading the goodwill of other nations into the Junta's heavily guarded storehouses. All other emotions will be punishable by death.

Neighboring nations will take up the difficult and challenging task of associating the help of friendly nations with the feeling of despondency that comes naturally to most Burmese citizens, even at the best of times. Doctors from China, Thailand and India, normally operating under the Hippocratic Oath in circumstances such as these, will only be allowed into the country if they agree to revoke their oath and join the dark side of the force by killing children.

The Junta, fearing they would appear soft by making this compromise, re-iterated their long-standing policy of absolutely "No Gelflings" and refused to return any phone calls, claiming that western influences such as Elmo are known to traverse into foreign nations electromagnetically.