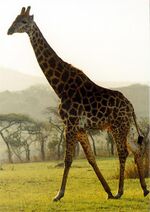 A circus giraffe that managed to escape its inevitably tasty doom.

OAKLAND, California - After a six-month investigation, the recent reports of disappearing circus animals have finally led to the capture and arrest of a culprit, who most officials believe to be guilty, but it may have come too late.

Mother's Cookies, known for almost a century for making the famous Circus Animals cookies, has a secret that has been kept under wraps for years. They have been sneaking into traveling circus cars at night and stealing the animals, which they use to make their cookies. The company decided to shape its cookies into the animals that went into them, so that they could fool the public further, letting them know exactly what they were eating without them really knowing at all. Eventually, there were no circus animals left, and when the production of Mother's Cookies started to slow, detectives started to suspect them.

Uncyclopedia News tried to schedule interview with the one known only as Mother, CEO of Mother's Cookies, without success.

Mother and a group of her high-level cohorts are being kept in a maximum security prison, and are facing life in prison without bail.