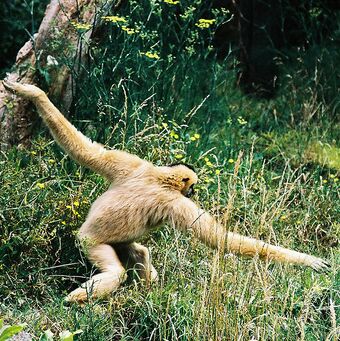 ZHENGZHOU, China -- Physicians in China have perfected an operation replacing human arms with the arms of gibbons. Citing a need for some people to excessively "pat themselves on the back," oriental medical professionals say that replacing people's arms and shoulders with the arms and shoulders of a gibbon will make this practice much easier, more fulfilling, and, more importantly, much more obvious to other people in the vicinity.

"A gibbon uses its very long arms to swing from branch-to-branch in high tree canopies," says Dr. Xiun Chou of the Zhangzhou School of Medicine and Massage. "Humans with gibbon arms will want to do that too, but we anticipate that most who opt for this operation will just want to pat themselves on the back."

Narcissists hailed the operation as a major breakthrough. "OhmyGod, ohmyGod, where do I sign-up?" asked American actress Lindsay Lohan, a faux-major star who made one semi-good film when she was eleven and has lived off its glory ever since. "I starred in The Parent Trap for God's sake, everyone knows that. I need those arms!"

"Patting yourself on the back is a universal trait," said John "The Man" Pernelli, the editor of Who's Who, an annual listing of such creatures. "Never before in history has there been such an opportunity for the practice. Instead of people seeking their 15-minutes of fame, they now want their 15-megabytes of bandwidth. They know, as I do, that when someone else is aware of who you are and what you've done, they will be watched more closely - thus making it much less likely that tigers and snakes can sneak up the tree trunk and kill them. And since someone will always be watching, many of them of the same or opposite sex, people will 'get more' too. Gibbon arms will really be helpful in all of these things. My pair should be arriving within the month."

Captured gibbons seem oblivious to their fate, and often believe they're going on a joyride. Gibbon hunters take advantage of this trait, and entice them with fresh papaya and fast cars.

Dr. Chou said that Chinese trappers and hunters are in the process of depopulating nature of gibbons throughout their Southeast Asian habitat. "We anticipate we will need several thousand arms a year," Chou proudly said while swinging from a high branch with one hand and patting himself on the back with the other, "so after a few years we'll have to rely on gibbon farms. These farms will employ many pre-teen workers, helping my fellow Chinese to further concentrate global monetary power into our hands. There is no other economy as strong as the Chinese economy, especially when it comes to the medical profession," Chou said as patting motions could be seen moving the back of his shirt up and down, up and down.

Reporters, columnists, bloggers, and members of the public relations firm that arranged the Chou news conference intently wrote down what Chou said with one hand while patting themselves on the back with the other. Photographers, who took pictures of Dr. Chou whenever Lindsay Lohan was moved out of the way, joined the waiters and other hanger-ons in the room as counting themselves fortunate to be witnessing such a historical press conference, and planned to quickly text their friends and family members to tell them of their unique and exciting experience.