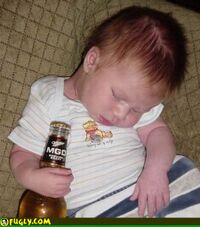 SANTA ANA, California -- Beer, which does a body good, will be the focus of "Lagers-n-Tots", a new summer camp program offered by the Santa Ana Parks & Recreation Dept.

Children and teens can register beginning Tuesday for the Santa Ana Public Library's summer beer drinking program. The annual summer programs are for babies through fifth graders and for sixth graders through teens. A registration event takes place at 6:30 p.m. at the Main Street Brewery, 26 Civic Center Drive and is sponsored by Miller Genuine Draft, Pikes Ale, and Partying Babies of Orange County, CA. Financial aid is available to those who qualifiy.

Beer is high in 9 essential vitamins. Not that these kids care.

In a recent conference call with 'Parents of the High Desert who Party with their Munchkins', President Elizabeth Sillycarr downplayed the notion that babies tastes are changing. "My little Henry participated in a similar event last year in Denver. He liked it & so did we, so we though we'd try it again this year. Kids always love beer, that ain't goin' away! Paaarttyy!! Woo HOOOO!!"