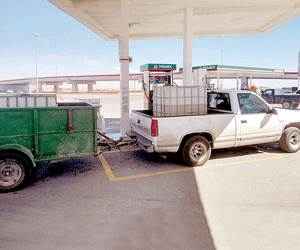 The next best thing to entering the United States to fill tanks "for personal consumption" is tanking up with a scenic view of the magical dry riverbed.

CHIHUAHUA, Mexico -- A 250-vehicle convoy undertook a journey from here to the U.S. border to buy discount gasoline.

Spokeswoman Luz María Mendoza stressed that the purchase was for "personal consumption" and that the huge polypropylene tanks in the beds of some of the pick-up trucks would not reappear in front of vacant storefronts back in the city for illegal resale to strangers. "That would be someone else," she said.

A few of the 250 who have border-crossing cards from the U.S. may have gone to hardware stores to buy some Stabilo, an additive that might ensure that the gasoline does not denature before all the "personal consumption" can occur.

Gasoline at the border is half the price of gasoline in the capital, a result of the nation's latest reform, which replaced Mexico's price-controlled monopoly with the current non-price-controlled monopoly. Gas in Ciudad Juárez is constrained by the ability to cross over into El Paso, Texas, while gas back in Chihuahua is not. Spokesmen advocated a return to price controls, which they say would lower prices in Chihuahua without either raising prices in Juárez or putting all its gas stations out of business — a conclusion they seem to have reached without any coaching from the Obama administration. Actually crossing into El Paso to fill up was out of the question, as border guards might not buy the "personal consumption" line, at least not without a substantial gratiuty for their inspectional services. 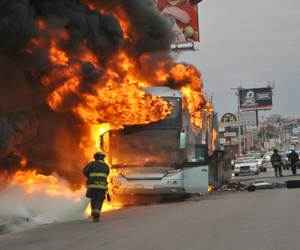 One of the convoy vehicles ignored advice not to store el combustible in the passenger compartment, but got as far as Ahumada ("smoke-signal") on the return trip.

The convoy assembled at 6:00 Thursday, in an unprecedented display of punctuality, and only six hours later stopped at Villa Ahumada to pick up adherents from small towns to begin the last four hours of the journey toward the United States. Ms. Mendoza instructed convoy members not to smoke near their vehicles, to leak-test their 1000-gallon tanks, to return at night to minimize the effects of the desert heat, and to try extra hard to avoid crashes; also, highway bandits, as a massive, amateur commercial operation might attract amateur toll-takers. Taking the good roads was also to be avoided, as the real toll-takers might classify them commercial vehicles, which would wipe out most of the savings they had achieved.

Those without poly tanks faced the dilemma that it takes more than a tankful to reach the border to buy a cheap tankful. Some of these stayed overnight in Juárez and took advantage of the chance to take in one of the city's unique animal acts that make it a popular theater destination for Americans. Ms. Mendoza was undeterred by the problematic nature of driving 500 miles to find the cheapest pumps. "We are going to stay on-message. We refuse to over-pay for gasoline!"