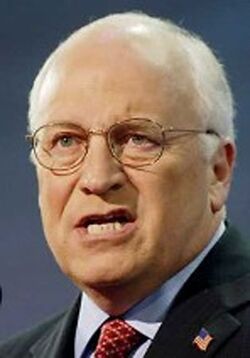 CHEYENNE MOUNTAIN, MONTANA, USA -- Perennial broker for the Military-Security Complex, Former Vice President Dick Cheney, warned that the next terrorist attack could be far worse than 9/11; and if anyone should know, its Dick,[Citation not needed at all; thank you very much] so pay attention, for fuck’s sake!

The 73-year-old war-profiteer sat down with political pundit Eddie Griffin on Sunday for the comedian's latest installment of Eddie Griffin News. The two intellectuals discussed Cheney's time as Secretary of Offense during the Gulf War; the Nixon War, the Ford War, the Reagan War, the Bush War, and 9/11; not to mention the fascist threat we face from him today.

"We have no choice but to divide and rule the world because we’re the master race,” Cheney told to Griffin, who was struggling to maintain a humorous demeanor in the face of Hitlerian concepts. “So if we are not actively involved everywhere then bad things can happen anywhere!”

Cheney admitted to Griffin that he has often brainstormed on future threats. “I gave an interview in the spring of ’01 where I warned about the biggest threats facing the country, and I talked then about the probability of nutters using something really haywire, a weapon of mass inconvenience (WMI) such as an Electro-magnetic-pulse, for example.”

Cheney continued, “Some of the options I dreamed up include: Chinese WMI on Japan, a Russian WMI on Ukraine, a Cuban WMI on Miami, a Polish WMI on Poland, or, more likely, an Israeli WMI on Iran, any of these would be great to help us progress to the next level of human evolution.”

Cheney opined, “if war-monger Iranians are made to appear as if they have a WMI, then it won’t be long before that imaginary weapon falls into the hands of the Islamic State, who, while fighting Assad and Hamas, are most likely allies of Iran, and NATO, or something like that…

“So we’re in a very touchy period. I think it’s more threatening than the period before 9/11,” the former vice president explained, referring to the Clinton-Lewinsky era. “9/11 could be insignificant compared to the next attack using a weapon of mass inconvenience. When that happens it will be something far more annoying than non-diseased and non-radioactive terrorists. It will be worse, much worse, we are talking about no wifi!”

While headlines about the Islamic State have given Cheney more newspeak to work with, he's actually been anticipating a truly epic attack for more than 40 years, noted Cracked Magazine, while pointing out that even the Mutt & Jeff of battle-axes, McCain and Graham, think Cheney is a militarist.

Taking our lead from Cracked Magazine, who ran off to satirize this diabolical crap, we are filing our Unnews, which most certainly will not be found in the Main Stream “Ministry of Truth”. So, keep your bloody heads down and always remember the core principles of the future, namely: