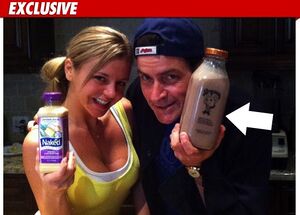 IN CASE YOU DIDN'T NOTICE, THERE IS MILK IN THIS PICTURE. PLEASE, ALLOW YOUR EYES AND ATTENTION TO FOCUS ON CHARLIE SHEEN'S CHOCOLATE MILK. THIS IS WHAT THE ARROW IS FOR. THANK YOU.

HOLLYWOOD, California -- It looks like ignorance is bliss for actor Charlie Sheen, who's still dressed to the nines even though he's stuck between a rock and a hard place after throwing pots from his glass house's black kettle with the Two and a Half Men creator Chuck Lorre, who's all bent out of shape about some hard to swallow comments from Sheen, and has said it's curtains for the popular television program. Oh well, it is what is, time heals all wounds, and the rolling stone gathers no moss, am I right?

It all started just two days ago, when Sheen registered an account on the zesty hot website "twitter," where he became the fastest person yet to reach 1,000,000 followers, a distinction so arbitrary and meaningless that when I think about the people that care about this horse shit I die a little inside. In a demonstration of the potential marketing power of his twitter account, Sheen uploaded a picture of himself (right) holding a young model and a glass of milk, pretending to smile yet failing to hide his grinding teeth, the result of cocaine withdrawal and an intense hatred of the shallow celebrity culture he was now prostituting his way into.

Sheen's proof-of-concept advertisement could indicate a potential stream of revenue for twitter, which as yet has no business strategy and no revenue, so instead of talking about that potentially slightly interesting subject, UnNews is going to go down the road of "Who is that blond chick he's with, and is there any way we can use her to make him look worse than he already does?" Certainly, a quick google search revealed that the girl was Bree Olson, a popular adult film actress to whom I've totally masturbated before, but where would celebrity gossip news be without a little "investigative journalism," am I right? A little "snooping around," you know, "digging up some dirt," or "invading a private citizen's privacy in order to fellate the disgusting western obsession with celebrity culture the way that Bree Olson would fellate an enormous throbbing dick"? That sort of thing.

UnNews entered Sheen's Hollywood home through a second story window (the trick is to bring a ladder and a screwdriver and just take the window out of the frame), and spoke to him briefly. When asked about the girl in the photo, Sheen at first replied,

"Who are you? What are you talking about? Get out of my house!"

When pressed for answers, Sheen replied, "Look, I don't know who you are, but I'm not Sheen. I don't even know him, I swear! Please, just put the gun away, I have a family!"

A bit more snooping around Sheen's house yielded little more than 274 dollars in cash, a new-ish plasma TV with surround sound, and an iPad, all of which were confiscated by UnNews for... "journalistic purposes." ...Yes. Also, we used the iPad to look up the girl, and it turned out that she was in fact Bree Olson, adult film actress. Who knew?

A few days later, Charlie Sheen gave a press conference while high on cocaine, and among his psychotic ramblings and repetitions of the suggestion that "everyone should smoke rocks erryday" was the quote "Sure, and 20 isn't that young," which lacks context due to lazy reporting. For some reason, this is important enough to be the title of the news article. 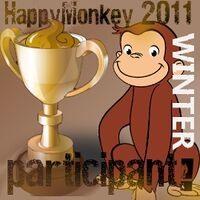