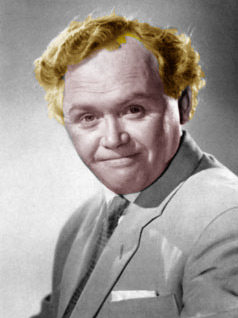 Much loved British comedian Charlie Drake was reported dead yesterday aged 81. The star of numerous TV shows between the 1950s and the 1990s, Charlie is perhaps best remembered for his ill-manufactured native Australian weaponry.

In what Police sources are calling "A series of unfortunate events" experts are still piecing together details from CCTV footage.

A Spokesperson for Scotland Yard released the following statement, "According to recordings Mr Drake was seen exiting a Labour Exchange office in South London at around 11:30 where he seems to have become involved in an altercation with a member of staff. On attempting to escape Mr Drake slipped on a banana skin propelling him into a group of bystanders, who threw him down a set of stairs. It seems that these led to the London Underground, and it was onto the 11:55 from Paddington that Mr Drake rolled."

"Whilst on the train he was jostled along the carriages that were full of commuters, before being ejected at his local station. In his confused state he appears to have being involved in some kind of incident involving workmen carrying a large piece of wood, which resulted in a substantial head injury. Resting on the plank he seems to have being catapulted onto the roof of his home in Twickenham, West London."

"Losing his grip on the chimney breast he slid down the rooftop, his trousers becoming entangled in the guttering. In trying to release himself he was swung down and through the bedroom window of his home, where Mr Drake died peacefully in his bed."