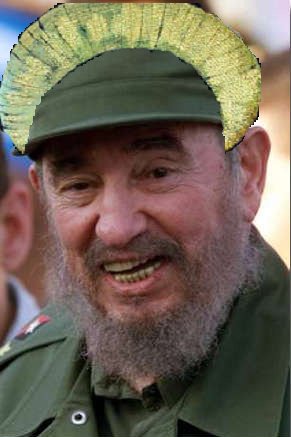 HAVANA, Cuba -- In what will be remembered as a tragic day for years to come, Cuban dictator Fidel Castro died today, at a hospital set up in the back of his pickup truck. The dictator passed away at roughly 3:00 P.M. Thursday, while his friends danced and rejoiced in the streets. Castro will be remembered for his selfless humanitarian acts and all he has done to advance Cuba. After hearing of his passing, The Pope granted Castro (now Saint Fidel) sainthood for his heroic and selfless acts to advance his country.

Since taking power of Cuba more than 45 years ago, Castro did everything in his power to improve the country's relations with the rest of the world. Thanks to him, Cuba's economy is booming, and the people have never been happier, most describing it as a "Golden Age." Cuba also has an incredibly stable government, set up by Castro. His death will likely prove to be a huge loss for the people.

United States president George W. Bush held a press conference this afternoon to address Castro's death. "He was a man I greatly admired," said Bush, sobbing heavily. "I looked up to him growing up, I hoped I could be as effective a ruler as him one day." Indeed, Bush has proven to be as effective as Castro.

Castro will certainly be remembered for eternity. Upon hearing of his death, the Catholic Church held a secret meeting with top Cardinals and The Pope. After a three hour deliberation, the papacy announced publicly that Castro had been granted sainthood. Saint Fidel will even have a special room in the Vatican made in his honor. "We need to use this man as a prime example of what it takes to be a great person," Pope Eggs Benedict stated.

Castro's legacy will not be forgotten any time soon. The impact this heroic leader made will last forever. Saint Fidel shall forever be remembered in the hearts and minds of the millions he has touched. Worship Castro!!!