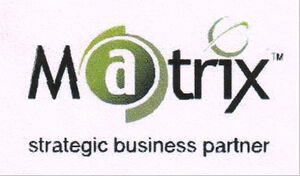 The logo of Matrix services, the company from where the murder weapon was purchased.

NEW YORK CITY, New York -- John Mason, Jr., an accountant working for some corporation, was arrested by the NYPD yesterday for the "murder of cash." According to the police, a garbage truck driver called emergency services when he came across a burning dumpster. Once the emergency services had doused the dumpster, the police began investigating and discovered that the source of the fire was a few big bags with dollar marks on them.

Fortunately, the police were able to salvage some prints off whatever was left of the bags, and that's how they found and arrested John Mason Jr., who had incidentally just issued a Matrix Forex Credit Card for himself.

"It was very professionally done," said a fellow police officer, on condition of anonymity, "Our perp had ruthlessly tortured and mutilated his cash denominations using his credit card, but he ensured that they weren't entirely ripped to pieces. That way, he could dump these semi-shredded cash notes into his bank account without arousing any suspicion. However, his attempt to burn the body - sorry - moneybags where he carried his victims proved to be his undoing."

John Mason, Jr. has reportedly confessed to all charges against him. Sources tell us that during interrogation he unabashedly admitted how cash had become "too much of a burden" for him to carry.

"It was so heavy on my wallet, it's so damn hard to keep track of," Mason allegedly told police interrogators. "I was just so sick of carrying it everywhere with me! I had to get rid of it, I just had to!"

The district attorney has made it very clear he intends to push for the maximum possible penalty while prosecuting John Mason, Jr. The district attorney told reporters, "Cash is a vital form of money, used for countless financial transactions across the world! I don't have words to describe how disgusted I feel when people butcher our beloved paper notes the way John Mason, Jr. has!"