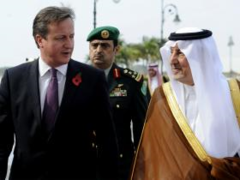 "I also want Mr. Corbyn...dealt with David...oh, and can you lend me a tenner until Friday?"

Prince Abdulaziz complained that at a recent party conference, Labour leader Jeremy Corbyn had been hitting the public hard over the Saudis' human-rights issues. He warned that the Arabs would veto plans to approach the UK for a payday loan in 2020, unless the "hypocrites" in Government force Corbyn to stop throwing stones at them over their human-rights record.

According to the IMF, Saudi Arabia’s cash reserves are in free fall, due largely to the drop in oil prices and simultaneous rise in the numbers of solid-gold faucet taps and high-spec Bentley turbos. And yet, this year the kingdom spent $32 billion just to celebrate the coronation of King Salman Bin Abdulaziz Al Saud.

In an opinion piece in The Daily Telegraph, Prince Abdulaziz stated that the importance of Saudi Arabia to the UK was never about money, or oil, or BAE Systems; but maintaining the ever-stable Middle East security situation; as well as its vital role as the epicenter of Islam. He added that he would like his banking relationship with the UK to continue after they have all returned to tents in the desert; but will not be lectured by anyone.

The Prince surely meant Corbin. During the Labour Party conference speech, Corbin first highlighted the plight of Sheikh al-Nimr’s nephew Ali, saying Ali was threatened with beheading and crucifixion “for taking part in a demonstration at the age of 17,” first offence.

Suggesting that culture-clash may depend on the direction of culture-cash, the UK has recently signed energy, infrastructure and entertainment deals with human-rights champion China. Given a steep drop in the price of petrol with which to fill the nation's cheap-import Bentleys, discussions on cultural nuances with China have been described as more "tolerant" than with the Middle East.

The Prince feels that Saudi Arabia would find it much easier to approach the UK for some petrol money if the Labour Leader and human-rights campaigner were brought swiftly and publically to heel with at least 200 lashes, broadcast live from Tower Bridge midway through PM’s Questions, or The Great British Bake Off semi-finals. PM David Cameron called that "an excellent idea."