UnNews:Carrots are only nutritious if they are consumed - study finds 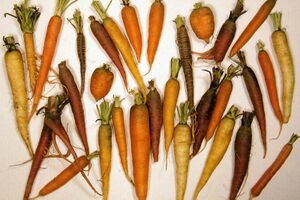 In their original form carrots are not nutritious

Scientific almost-american — A group of Japanese researchers at the university of Texas have found that even though carrots contain large amounts of sugar, Vitamin A and minerals those are only used by the human body if they actually consume the vegetable.

The group who spent the last 7 years studying carrot-related-symptoms also noted that people who actually drew, sketched, caressed, stood near or made of carrots their logo got very little or no nutrition at all which might explain the reasons behind Napoleon's mysterious lack of vitamin A since he used to keep a lot of carrots but never consumed them.

The researchers ended their discovery by a notice to families to actually consume carrots orally be it chopped, cut, as a juice or as a whole in the hole but not to use them in any other ways on their family members.