UnNews:Canada prepares for war with Iran 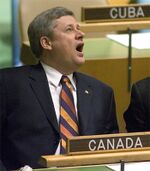 The Canadian Prime Minister speaks at the United Nations, which is the signal for delegates to go for lunch.

Harper, speaking on a forum befitting a man of his influence, told an AM radio talk show audience, "Be under no illusion, Iran is a very serious threat to international peace and security." Experts on Middle-eastern affairs questioned the Prime Minister's assertions, but were immediately marginalized as pinkos by Don Cherry, and never heard from again.

First appointed Prime Minister of Canada by then-president George W. Bush in 2006, Conservative Party leader Harper may have been the only Canadian politician who actually wanted Canada to take part in the United States's 2003 invasion of Iraq. To the relief of a vast majority of Canadians at the time, Liberal Prime Minister Jean Chretien managed to weasel out of the Iraqi quagmire. Since taking office, Harper has increased military spending by billions of dollars in Canada despite an economic recession and the fact that Canada has no enemies. If a war comes to fruition, Harper may finally get to realize his dream of invading a Middle-eastern state on a flimsy pretext, just like his heroes in the Bush administration.

The Iranian state has recently been the winner of several international disputes, amidst crippling economic sanctions which prompted Iranian President Mahmoud Ahmadinijad to famously say, "Oh, yeah?, C'mon, more sanctions, bitch, what else you got?" Iranian forces reportedly captured a US surveillance drone within their borders in December, and stoned it to death on live television. Iran has for several years been pursuing a nuclear program which they insist is merely for energy-producing purposes - presumably in the way that energy is created when you detonate an atomic bomb in Israel.

Canada has diverted elements of the Canadian fleet to the Arabian Sea. The Heavy Arctic Icebreaker CCGS Terry Fox will take command, supported by the tugboats Glendyne and Glenside. With Canada's fleet of diesel-powered submarines still in drydock and undergoing repairs more than a decade after being purchased at bargain prices from Great Britain, the Prime Mininster has ordered the reserve fleet of submarines presently being used as a ride at West Edmonton Mall to be reactivated and deployed at once. Should Canada commit to a land invasion, biological warfare may be expected in the form of Canadian Geese, which will fly in and crap all over everything.

International reaction was mute, as Canadian news does not travel beyond the country's own borders very often. US President Barack Obama, when told about Canada's action against Iran, said, "Really? That's adorable!"