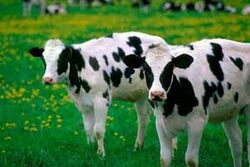 SACRAMENTO, California -- The State of California today has announced its intention to seek litigation against the world's bovine population, stating that greenhouse gases are costing billions of dollars. In a statement issued on behalf of the State Attorney General, it says flatulent emissions from cows are doing great harm to health, the economy and the environment and must be paid for.

The complaint alleges that the cows' digestive activities have harmed the state's environmental health, with California having to spend millions of dollars responding to environmental threats such as coastal erosion. Similar action was recently instigated against car manufacturers.

A spokesman for the Bovine Brotherhood released the following statement - "When you have an agricultural economy you end up producing a lot of greenhouse gas. That is the price the world pays for its burgers and milkshakes."

Flatulence and belching by cows derives from a process known as "enteric fermentation", which leads to a build up of methane gas in the guts of these animals, the pressure of which is relieved by emission. Scientists are considering the use of technological advances in order to enable the clean "burn off" of these gases, which they feel may also provide a clean source of power for the 21st Century. "Cow-powered" automobiles have been mooted for some time.

The Governor of California, Arnold Schwarzenegger said "those cows will be bricking it. We will destroy this menace, by suing them for all the money they have!" Arnie later symbolically punched a cow in the face. An angry cow later stated Eat Me!, and Arnie obliged, taking a large portion out of its rump.