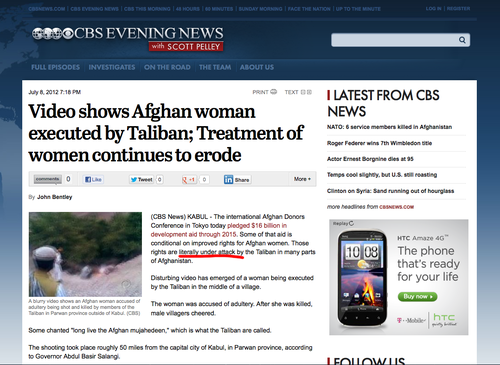 A screenshot of the offending article, now banned by the Geneva Convention.

KABUL -- An assembly of English language purists kidnapped and shot John Bentley today, after the CBS reporter allegedly misused the term literally in a recent article on Afghanistan. Bentley was executed in the middle of an Afghani village after he reportedly stated that the rights of women in Afghanistan "are literally under attack by the Taliban." According to Kabul Governor Abdul Basir Salangi, "the term literally has always been defined as 'in a literal matter or sense'. Allowing this term to precede figures of speech is completely inappropriate in such a high-end publication." He also says that the reporter was romantically involved with two Taliban commanders. Fawzia Koofi, a member of Afghanistan's parliament who has read the article, says American grammar has worsened over the past year, stating, "Americans are not only misusing terms such as literally but are beginning confuse it's with its, your with you're, and then with than." The Afghan government has also issued a statement condemning Bently's "un-Islamic" and "inhuman" action. Despite the fact that Bently was one of its reporters, CBS has refused to comment on his execution or crime.