(Washington, DC) President George W. Bush is expected to announce in a live televised speech to the nation on Monday night that he will order thousands of National Guard troops to be immediately deployed on the northern border with Canada. Faced with a growing immigration crisis and a porous border, the administrations sees this as the only way to stop the Canucks from invading America.

The border patrol has been stretched thin for years, and millions of illegal immigrants pour in yearly from Canada. Once they cross, it is next to impossible to identify them, as in terms of physical features Canadians look just like Americans. Border Patrol guard Steve Jacobs laments, "That 30 year old white male you see every day on your way to work could indeed be a true, patriotic southern-born flag-waving, freedom-loving American... but you can't tell for sure - he could be a smelly, French-loving, maple leaf, maple tree hugging, funny-accented Canadian."

Republicans and conservatives are calling for harsh immigration measures, wanting to deport all the illegal Canucks back to their homeland. While that has been deemed as infeasible, the government at least wants to stop a flood of new ones coming in. Bush is poised to recall a few contingents of National Guardsmen from Iraq and place them in New England. A senior White House official requesting anonymity added, "Once we prove that this method works there, the troops will be deployed westward, across the border from the nefarious Saskatchewan province, and all the way to the Pacific Ocean. We will not let Seattle become Canadized."

Another concern is the long and sparsely populated border region between Alaska and the Yukon territory. The frigid, mountainous territory is difficult to patrol, and the sneaky Canadians use snow and caves for cover. Hundreds of thousands cross there yearly, but accurate numbers are impossible to estimate. The Pentagon is mulling withdrawing elite Army units from the equally harsh Afghanistan-Pakistan border (where they are currently searching for Osama Bin Laden), and placing them on the Yukon frontier. Defense Secretary Rumsfeld explained, "Clearly, it's far more important to secure our border than to search for Osama."

Millions of Canadian immigrants, both legal and illegal, have recently staged marches across the country in protest of the administration's drastic plans. Quebec immigrant Jacques Caulvert complained, "What's all this aboot, eh? Can't they let us live and drink our maple syrup in peace?" Democrats in Congress sympathize with the plight of the immigrants, but also agree that the problem must be solved somehow. Senator Kennedy remarked that, "Canadians are taking away American jobs. Like the job of a hockey player for example."

The drop in Jobs including, but not limited to, Maple Syrup producer, Hockey player, lumberjack, and producer of those funny little hats they wear, has been over 33.3%. How much over? 400% This chart proves it. 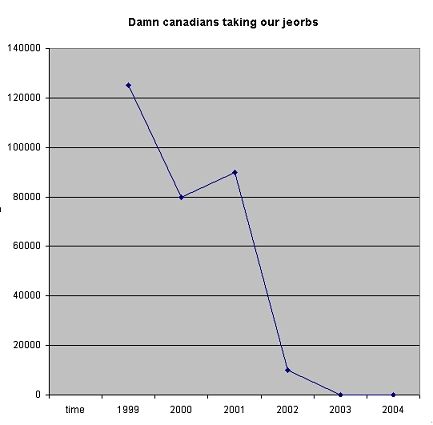 (Warning: numbers may be completely arbitrary. Chart may also have been made by a chimpanzee)

While not before citing drugs as a reason, a recent drug bust has forced Bush's hand into expediting the process of strengthening the Canadian Border. An unprecedented crime ring was found growing relatively harmless Marijuana where it is legal, and then smuggling it into America in exchange for Kittens, Insulin, and other stronger drugs. This move by the President has been called "ballsy" and "a better alternative to legalizing weed"; Bush is again being lauded as the greatest human being alive.