An artist's impression of George Bush's brain. (Image not to scale) 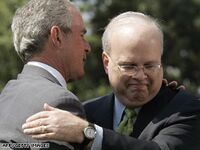 Washington, D.C.-- UnNews -- In an emotional farewell outside the White House on Monday, President George Bush announced the resignation and imminent departure of his brain.

Speaking to reporters outside the White House with a neurosurgeon at his side, Bush said discussions about his brain's departure began last summer. "It always seemed there was a better time to leave, somewhere out there in the future. But now is the time."

Bush confirmed that his brain "is movin' on down the road," and added enigmatically, "I'll be on the road behind you here in a little bit." It appears that Bush has had a brain for decades. An anonymous and androgynous White House spokesperson said they have been friends for 34 years. It is not known what their relationship was prior to that time.

Speculation about Bush's brain has been rife for a number of years, ever since a Democratic election advertisement accused him of losing it. The Democratic Party later apologised for the advertisement in an official statement: "We apologise. You cannot lose something that you do not have." Calls to the Democratic Party headquarters, to enquire whether a second retraction would be forthcoming, were not immediately returned.