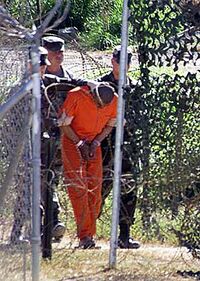 Helpful agents escort one of the detained Congressional Candidates to his next appointment.

WASHINGTON, DC -- Less than 24 hours after signing the Military Powers Act into law, President Bush declared 249 Democratic Congressional Candidates to be Enemy Combatants, and ordered that they be immediately rounded up and detained.

They are being held for reasons unknown, at an undisclosed location, for an indeterminate period of time, but the White House insists that they are not being tortured, at least not by any reasonable definition of "torture". A bit of good natured water-boarding, however, has not been ruled out, at this time.

"This is only a temporary situation," White House spokesperson Tony Snow stated, during his regular morning press briefing, "I'm sure everything will be quickly sorted out, possibly as early as the 8th or 9th of November."

In the mean time, the White House is urging everyone to vote as usual in the upcoming mid-term elections. "It is important that we not allow a few dozen potential terrorists to undermine the election process," Snow stated.

"Besides," he added in conclusion, "There are still many patriotic candidates available to choose from. Go out and vote for one of them."