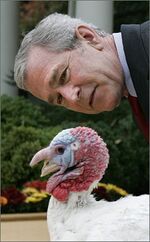 President Bush examines May the turkey, an animal he declared "America's enemy #1."

WASHINGTON, DC -- To the shock of all of Americans, Native and otherwise, President Bush broke a long-standing tradition and decided not to pardon a pair of Thanksgiving turkeys. At a special White House ceremony on Tuesday, the President gave a speech declaring that the execution of May and Flower, the two honorary Thanksgiving turkeys, should go on as scheduled. The stunned audience, much of which consisted of young children, was told that Bush wants to be seen as "tough on crime." This puts him in stark contrast with the "liberal, bleeding heart" Democrats. Nancy Pelosi, Democrat leader in the House proposed pardoning every turkey in America, and requiring holiday celebrants to eat tofu turkeys. Off camera she was overheard to say "This stuff tastes like s***."

It's unclear what the two turkeys were even convicted of, and the State Department insists their indictments should remain sealed for national security purposes. Their trial allegedly took place in front of a military tribunal at Guantanamo Bay. Only May was present at the White House ceremony, while his accomplice Flower was deemed too dangerous to transport. Shackled to a tree on the South Lawn, May only gobbled meekly in response to the President's tough decision.

"With flamboyant names like May and Flower, it's clear these turkeys are subversive terrorist sympathizers," Bush emphatically declared,"I'm pretty sure May's real name is Mahmoud!" he said. Pounding his fist on the podium, the President continued "Pardons aren't just for anyone. Even my pal Scooter Libby only got his sentence commuted, and he was a real turkey. So do you think these phoneys deserve any better?," he added. In his lengthy speech, the President further suggested his new tough stance on animal criminals will extend beyond Thanksgiving. "Just wait till Groundhog Day - if that furry villain predicts an early spring because of global warming, I will have him sent to live in Richard Gear's colon," Mr. Bush warned.

Without the Presidential pardon, May and Flower are almost out of options. Their executions are scheduled for 8pm Thursday, just in time for a late Thanksgiving dinner. Lawyers have filed a last-minute emergency appeal to the Supreme Court on their behalf, but chances of success are very slim. New Chief Justice John Roberts concedes that he himself "would like to eat a juicy piece of Flower's breasts -- I really like breasts" he said. It is well-known that Roberts dislikes Justices Ginsberg and Sandra Day O'Conner because of their "breast issues." Roberts has included comments about their breasts in almost every opinion, writing extensive footnotes on the subject.

If the execution proceeds as scheduled, the turkeys are to be killed by means of a firing squad. For this special occasion, Vice President Dick Cheney has arranged to personally pull the trigger. Mr. Cheney, who originally wanted to strangle the turkeys was convinced that it "wouldn't look good." Instead the White House public relations office convinced Mr. Cheney that it would be better to shoot them in a surprise appearance at a local school with an audience of pre-schoolers. World wide publicity is being arranged for the event.

When told of White House plans, former Vice President and presidential candidate Al Gore said only "It's not fair! It's not fair! This should be me!"