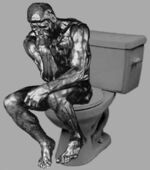 Our talents will never be wasted again

Scatsville, Ohio Emerging trends suggest that revolting new methods for trading in new privately-issued feces are gaining support from bankers. Under the new plan, poo would replace the traditional banknote.

"The new system will be perfect." announced banking spokesman E. Vilnemesis from the comfort of his luxury bathroom, "it scales to current economic models without any flaws. The fact is, rich people have always had a lot more crap. We have a dream here, where Americans will not be judged by the contents of their character, but by the capacity of their bowels." After his presentation there was a brief question period during which it became clear that not only is human fecal matter currently undervalued, but is also nutritious and a fuel supply that is both biodegradable and renewable.

Some public resistance to the press conference went largely unnoticed as shit-flinging monkeys protested outside various government buildings for their right to freely fling feces without being required by law to open a bank account. More conservative proponents of the legislation have vowed to make it illegal to defecate anywhere other than in a certified banking facility. "We are wasting a lot of shit here in America, " argued an albino donkey, "this measure isn't going far enough."

"Let's face it," conceeded Federal Reserve High Priest Igotcha Moola during a rare appearance on Earth, "I already own y'all. Now, I have a plan to own your ass too, bitches!" After a blinding flash he then faded into mist and vanished, likely teleporting back to his own private planet built to withstand the heat death of the universe.

Now-deceased members of the Press

A quick thinking reporter told everybody at the press conference to stand still and then handed out chalk so everybody could mark their positions on the floor before leaving. Within an hour, all present were dead.

The press conference was not in vain, as a greater understanding of the risks involved with exposure to Federal Agents was gained by the scientific community.

The stock price of Ex-lax shot up today, sending a "ripple effect" through world markets. Or, somebody just farted.

In unrelated news, Halliburton was awarded the contract for the proposed pipeline to be run from Karl Rove's anus directly to Wall Street.