UnNews:Britons to shut up on Sunday 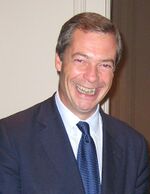 Unflappable Nigel Farage vowed to spend the entire minute ranting that someone needs to fire upon the rafts of migrants crossing the English Channel.

LONDON, United Kingdom -- Britain is to observe a 'minute of silence' Sunday, on the eve of the burial of Queen Elizabeth II.

Government said the minute-long 'moment' of reflection would take place at 7 p.m. GMT — which, anywhere in Britain, is 7 p.m.

The Queen had outlived nearly all other Britons, and thus almost no one has been asked to be silent for a full minute in their entire lives. In fact, most Britons are unable to 'put a sock in it' for more than a few seconds, and it is a rare individual who can 'reflect' on anything for one entire minute.

Electronic signage was being deployed to one end of Hyde Park which, at the designated time, will re-label Speaker's Corner as 'Non-Speaker's Corner'. Metropolitan police will scowl at individuals who refuse to pause their description of the current global conspiracies. Motorists on the M25 were asked to avoid the use of horns during the designated minute and allow drivers from Eastern Europe to just crash into their cars instead.

Live coverage of the respectful minute will be made available via UnNews Audio.