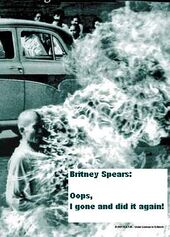 Mad as a Chelsea Loon!

Britney Spears has announced that she is to release a new album next month! In a sensational twist in the rollercoaster story of former princess of pop it emerged that she recorded an entire album whilst in rehab.

Titled "Oops I gone and done it again!" the album cover depicts Britney when she caught fire during a failed attempt at the world fire-eating record last month. She can now look back on that day and laugh, "I may need a few hundred more skin grafts but hey, I'm back and THAT is the best therapy."

Unnews had an exclusive preview of the album last night with none other than Spears herself to take us through some of her favourite tracks. Unfortunately the CD was devoid of any music whatsoever, in fact it was blank!

When asked why her new album didn't actually contain any material whatsoever Britney was slightly offended, "can you not hear the angel harps in track 1? real angels they are! Also take a listen to track 12, thats Jesus Christ himself on backing vocals. Oh yes PRAISE THE LORD-AH!"

Britney continued, "well, I admit the music is kinda in my own mind but I sorta project it into the other minds of my TRUE fans. If you can't hear anything then you aint a true fan. And if you aint a true fan then you are an agent of the Devil. BEGONE FOWL SPAWN OF HELL". We were then ejected from her room before the guards reapplied her straight jacket.

The first single from the forthcoming album "where's me knickers at?" will be released next week.