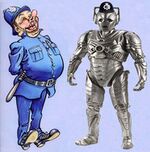 British police:Before and after the upgrade.

LONDON, United Kingdom -- The jovial, red-faced British 'Bobby' is to be replaced by a new Cyborg Copper known as 'MayDayPatroller'.

In a move to keep the streets of the United Kingdom safe, a new corps of 'Cyborg Police Officers' (CPOs) were revealed by British Prime Minister Theresa May. The new British Prime Minister has been keen on replacing the previous corps of police officers, who have guarded the streets since the days of Queen Victoria and Jack the Ripper. The-new look force will be able to work 24 hours non-stop.

"When I was Home Secretary, this is what I wanted to put out there to combat terrorists and tourists who keep asking daft questions," said May. "This will also end the tradition of policemen arresting people because they are the wrong colour or smell funny. The new CPOs will be completely indiscriminate and suspect everyone without favour."

The new robot police officers will be introduced once the software is ensured to be immune from possible tampering from China, the Islamic State, and Wikileaks.