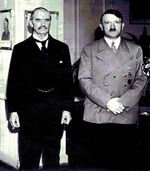 "We have listened and understood".

LONDON, United Kingdom. Prime Minister Neville Chamberlain has apparently seen off the threat from the continental "rightwing fringe" saying that it is "peace in our time". He has stated that he "agrees with the aims" of German Chancellor Adolf Hitler's to unite the German-speaking peoples of Europe but states that Britain has to remember its international obligations under the Treaty of Versailles.

"Let me make it clear that I understand Mr Hitler perfectly well. As I've said before, I fully support a referendum on British recognition of the annexation of the Sudetenland." said the British Prime Minister. Mr Chamberlain has also invited members of the fringe NSDAP to a "barbecue at Number Ten" to "discuss any concerns they have."

Mr Chamberlain's actions are seen as a slap in the face by some of his supporters who once saw him as a moderating force in favour of centrist Conservatism against right-wing extremism. "It wasn't that long ago that Mr Chamberlain was calling the Nazis 'Fruitcakes, Loonies and open racists, mostly" said one Tory MP with the initials W.C.

Concern has been growing amongst British moderates that Mr Chamberlain, far from being willing to take on the rightwing fringe, is instead something of an appeaser. "When Mr Chamberlain set out the British vision for Europe in the King's Speech, Mr Hitler and his followers responded with their "alternative King's speech" and Mr Chamberlain did nothing. Now he returns from Munich with promises of one of his fucking barbecues and says he "understands" people who, clearly, are out to destroy him."

Unnews called Mr Chamberlain for comment but were told he was "washing up the porridge".