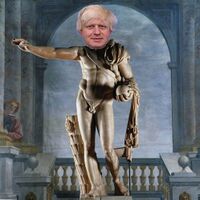 LONDINIUM, Roman Empire -- Roman Emperor Julius-Claudius Junckerstine has warned the Britons that 'running away from the empire' will lead to higher taxes and deformed babies if they vote to leave in June. This follows news that a majority of civilised Britons are fed up after 400 years or so of Pax Romana and access to the single Imperial market.

"If Britons vote to break away," said Emperor Junckerstine, " I predict Londinium will lose out with trading opportunities as other parts of the Roman world benefit. It will become a ghost town by 500 AD. I hope that our allies in Britannia will rally to the Roman eagle and reject the 'Leg-It' out campaign."

Junckerstine claims were backed by the Roman governor of Britannia, Diabolicus Camerus Erroneous and his treasurer Georgius Servilus Osbunkum. They claim a vote Leg-It will see thousands of Britons lose their citizenship rights in the Roman Empire and a change of status to that of slaves. Erroneous and Osbunkum also suggested that a leave result would encourage Goths, Vandals and Huns to invade the Roman Empire and destroy trade for everyone.

Erroneous has boasted that he has plenty of support, even from the barbaric Irish, Scots and Picts who say that a 'poorer Britannia' will be less fun to raid. He said 'Vote Roman' was winning through to the great unwashed.

Former imperialist supporter Boris Blondbonkus and his ally Nigglus Pompous say fears of that the Roman Empire is about to implode will give them victory.

"Being independent of the Roman Empire should hold no fears for us Britons," said Blondbonkus. "We can trade with the rest of the world, indeed I will be visiting the Vikings and Anglo-Saxons about exciting trading opportunities. They take far more from us than we get from them, except some interesting short curse words."

Nigglus Pompous added 'we just don't like foreigners or their muck. Vote Leg It.'