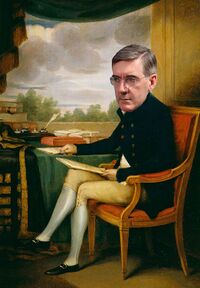 WESTMINSTER, United Kingdom -- The UK Cabinet has backed a draft withdrawal agreement between the UK and the EU, Theresa May has said. But Tory MP Jacob Rees-Mogg claimed the deal is unacceptable and far from harmful enough to the United Kingdom and its citizens. HE stated it did not respect the referendum result, commenting that, "people voted to lose all of their hope and wealth, not half of it. People know what they voted for and they want to live off cans of sweetcorn. There is every opportunity with this deal that people may still be able to buy ice-creams."

Rees-Mogg also said the deal would hamper any attempt to make trade deals with foreign territories; a potential one with Easter Island negotiated by International Air Miles Secretary Liam Fox being notably at risk. 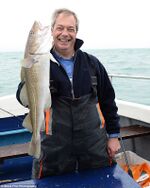 Nigel Farrage believes the fish have no confidence in Theresa May's Brexit negotiations.

But Theresa May will hope that she managed to convince enough of her MPs that the deal was indeed terrible enough for everyone. "It uniquely delivers exactly what no one wants," she said. "It is without doubt, the best opportunity in 100 years to make everyone miserable."

Anger from Conservative back-bench MPs at the seeming failure deliver complete Armageddon could force a leadership contest. This would lead to the opportunity to vote-in an even worse Prime Minister. Many are tipping Boris Johnson to come in and really fuck things up.

Labour leader Jeremy Corbyn criticised the deal, claiming that, "at 585 pages, the deal represents an unacceptable amount of time necessary to read the thing. The fact that a simple Power-Point was not created is a damning indictment of Tory irresponsibility." Corbyn is expected to consume the detail of the deal when an audio-book of the draft-agreement, read by Stephen Fry, is released in the coming weeks.