UnNews:Braga to the women: 'Feliz natal! I have given you a troll!'

~ Simone Bittencourt de Oliveira on how badass this album is, and his touch causes her to laugh of pleasure...

Rio de Janeiro, Brazil -- It is Christmas once again, and if you are Brazilian, you know what that means! Not only is it the birthday of Simone Bittencourt de Oliveira, but also Roberto Carlos Braga does something! On Rede Globo! Or something! And of course you know that back in November, he released an album, Esse cara sou eu (That man is me). Of course, this turned out to be a troll, because it only has four songs! So he came up with this jocular statement:

“You were expecting an album? How's this for an album! XD”

He then joined Simone in a rendition of "Jesus Cristo". And as is his custom, hugged her, which caused her to laugh uncontrollably.

An analysis of the lyrics.[edit]

This song, as well as "Furdúncio", another song on the album, is about jealousy. And why not? He has not known a woman in thirteen years. Obviously, if he were to have a woman, he would want to hold on to her, is that right? 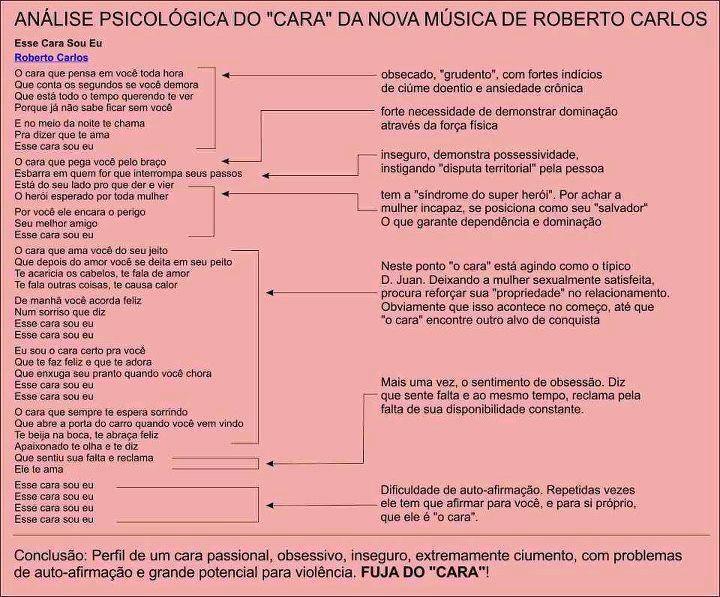 "The man who thinks about you all the time,
Who counts every second when you are delayed,
Who wants to see you all the time,
Because he doesn't know how to live without you.
And in the middle of the night he calls you
To tell you he loves you
That man is me."

"The man who grabs you by the arm"

"Confronts whoever stands in your way"

"He is at your side for better or for worse
The hero that every woman dreams of
For you he faces the dangers
Your best friend
That man is me."

"The man who loves you in his own way
Who after the loving, leans upon your chest
He caresses your hair, and speaks of love
He speaks of other things, and causes you warmth

The man who always awaits you smiling
Who opens the car door whenever you come
He kisses you on the mouth, hugs you happily"

CONCLUSION: This man is passionate, obsessive, insecure, extremely jealous, with self esteem issues and huge potential for violence. FLEE FROM THIS MAN!

Do they want him to die?[edit]

This reporter has lately noticed that the local Spanish-language radio stations seem to be playing an awful lot of RC's songs lately. Also, some dude on a dubious Portugal website has even started a stupid hoax that goes like this:

“Roberto Carlos has died, victim of an assault. He was shot in the head three times and died on the way to the hospital.”

Stupidly enough, this reporter actually believed it for a few seconds. Then she checked the Wikipedia. Nope, he's still alive. If he were dead, even the Wikipedia would have known about it by now.