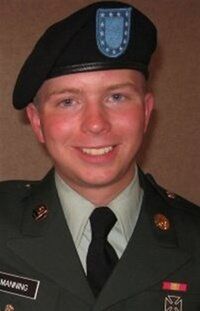 Private First Class Manning's "sarcastic quips" and original theories on the absurdism school of philosophy have earned him a cult following in the United States and abroad.

QUANTICO, Virginia -- Bradley Manning, the 23-year-old locked up in jail after being blamed for an unfortunate leak by the U.S. government, has had his limbs confiscated by military jailers. His attorney says the latest restrictions were imposed on the young serviceman after Manning made another "sarcastic quip". An earlier such quip had resulted in him losing his boxer shorts. The facility commander spoke of feeling "humiliation" and "embarrassment" after being forced to resort to the drastic measures.

On Wednesday, Manning was informed of concerns that he was still considered at risk of self-harm. Manning thought this an "absurd" idea and said he was perfectly capable of using "the elastic waistband of his underwear or his flip-flops" to end the matter. This approach backfired when these items were subsequently confiscated. Soon Manning was at it again. When the facility commander relented and visited him to offer to return his boxer shorts Manning asked him if he would like him to "walk right out of here and get them myself". Before Manning had completed the sentence the entire facility went into lockdown. Manning was reprimanded for his folly and his legs confiscated there and then. His arms were also taken away "for security reasons and for his own good".

Manning's confinement has become controversial. The serviceman's "sarcastic quips" have developed a cult following, while his efforts to label his confinement as "absurd" have been trending on Twitter. He has thus caused untold damage to the U.S. government's international reputation. The confiscation of his limbs will provide additional difficulties for the detainee when he attempts to exercise -- under the terms of his confinement he is permitted to do so for one hour each day.