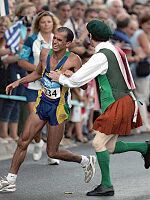 The state of Massachusetts provided a grief counselor for each runner, just in case worse came to worst.

BOSTON, Massachusetts -- The Boston Marathon was won by an actual American, rather than a starving African, for the first time in 31 years. A man who claims to be a U.S. citizen, despite having the name of Meb Keflezighi, won the men's division in 2:08:37. Keflezighi emigrated from Eritrea as a boy and thus is only semi-emaciated.

On Twitter, President Barack Obama congratulated Keflezighi and the top female American finisher "for making America proud" rather than leaving it to other Americans to make America proud by being the top American finishers. Mr. Obama further twerked, "All of today's runners showed the world the meaning of hash BostonStrong," though his typing did show a poignant and perhaps wistful pause at the word "hash". Mr. Obama hardly had a twinkle in his eye when mentioning emaciated Kenyan runner Rita Jeptoo, who won the women's division in 2:18:57.

The Marathon was also notable for not having any lethal explosions of pressure cookers carried by a Muslim shouting "Allahu Ackbar" who overstayed his visa and got on welfare. The Star-Spangled Banner played as Keflezighi crossed the finish line, to remind citizens that 260 persons were killed or maimed during last year's running of the event. Fully 32,000 contestants ran the Marathon, proving the businessman's adage that "any news is good news" and the politician's corollary that any news involving murder is good news for a new gun bill. Many of the runners wrote the names of the fallen on their bodies or apparel, which means that the fact that one of them won proves something.

Apparel with the slogan "Boston Strong" has been a hit in the year since the tragic misunderstanding, with citizens angrily asserting that attackers can't keep them from holding another Marathon, nor from having another inter-faith Moment of Silence at 2:49 p.m. with which to withhold judgement while holding hands and emoting, nor even keep some American from being the first American finisher. The Boston Red Sox even proved that foreigners can't keep some American team from winning the World Series.

Indeed, Dennis Murray, a health care worker from Atlanta who returned to run another Marathon, said, "When they try to take our freedom, we come back stronger." With 100 new government spy cameras, 90 bomb-sniffing dogs, and police posted on rooftops.