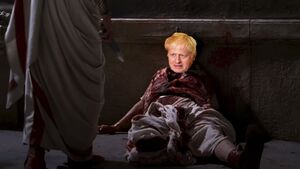 That's it for Boris Caesar...probably

LONDINIUM, Britannia -- Britannia's embattled emperor Boris Caesar was finally deposed in a massive knife fight at his home. This was the second time Britannia's ruling senatorial party, the Blue Team, had attempted to depose their leader. This time, they succeeded.

Boris Caesar has been involved in countless scrapes ever since he killed Empress Boadacious three years earlier. Now it was his turn to finally fall and make a mess of the imperial palace's polished floor. According to eyewitnesses, Boris was able to kill the chief assassin Michael Brutus, who had been previously seen as a close ally, but then the emperor fell to the floor. This knife fight was especially heated, as Michael Brutus had stabbed Boris Caesar's ambitions six years earlier but had then pardoned him.

"At least I got the chief snake," are said to be Boris Caesar's final coherent words. He then pulled his toga over his head and said something about 'carrying on'.

The latest assassination in Britannia's history is the third in six years. Boris Caesar was eventually brought down by defending a colleague who had a long reputation as a 'bottom pincher'. This and recent senatorial elections had pointed out to his own party that Boris Caesar's days were numbered.