Borg Homeworld, The Gamma Quadrant. The cyborg collective known as "The Borg" today announced a move into advertising in what is being seen as a bold move by industry analysts.

The first commercial to feature The Borg's distinctive brand of soulless destruction is the Dutch cheese Leerdammer. The new ad campaign is tipped to be a great success with the agency using the snappy tag-line "Resistance is futile". The cheese campaign is rumoured to be closely followed by an advert for the new ford Assimilate which will feature the driver of the car becoming absorbed into its metal structure, much like in a David Cronenberg movie. This will be later followed by an advert for Edam featuring the tag-line "Edam - good for what ails ya ( kill all humans )".

Given the level of excitement surrounding the Borgs bold venture into advertising, other intergalactic villains are making their own play for advertising gold including Darth Vader breakdancing in an advert for The Gap, and a bunch of Daleks listening to ipods. 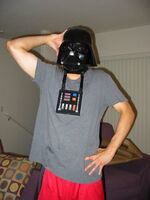 Shop at the Gap

Despite the competition the Borg remain optimistic as to the success of their campaigns, "I think we can get a good foothold in the market before these other players really get established which puts us in a much stronger position going forward.", the Borg spokesman told UnNews , "What are these Dalek things supposed to be anyway? They look like shit dustbins why would they want ipods? Kill all humans", he added.

LeerDammer cheese is available from all good retail outlets, the manufacturers have stressed that eating it will probably not cause you to be assimilated into the Boug collective.

In a separate development, scientists, led by former Vice President Al Gore and inventor of the internet, etc., revealed that the origin of the Borg was actually famous tennis star Bjorn Borg. Intensive investigation has revealed that Mr. Borg in a depressed state after losing a tennis match to a young starlet with an enormous chest who did not "play ball", got drunk one evening on a mixture of normally lethal battery acid and 'chum' - a concoction of ground up fish, guts and blood. It was further revealed that in a drunken stupor Mr. Borg had "relations' with a Rubik's Cube. The result was a cube-like life form which Mr. Borg initially tried to ignor but later gave his name. Although the offspring was initially called Bjorn, that name was abandoned as being too hard to pronounce and stupid.

The result, called only "the Borg," made a career on various versions of the television program Star Trek. But since that time has had no televison or movie roles. The Borg became depressed and a substance abuser, afterward entering the Betty Ford clinic where it became fast friends with a number of celebrities, including Brittany Spears with whom it is has been rumored to have had an "intimate" relationship. When asked about their relationship Spears said only "we're just good friends."

The Borg can still be seen in re-runs throughout the country and the world. Although it receives no income from these broadcasts, the Borg is vigorously discussed at so-called Star Trek conventions held throughout the country. It is said that a personal appearance of the Borg at one of these conventions is being planned but no contract has been finalized. The Borg is scheduled to appear in Atlantic City, as an opening act for Susanne Sommers.

Mr. Gore was very excited at the prospect of the Borg going public once again and said "The Borg may be just what is needed for the Democrats to regain the Whitehouse. A place on the ticket will generate incredible interest and will lock-up the space alien vote for the Party," he said happily. Turning suddenly serious, Gore added, "We really need this and have to shore the illegal alien vote since the Immigration Bill went down the hopper.Hay! You know, 'Resistance is futile,' right?"

Karl Rove said in response to questions directed to President Bush, said, "The President intends to appoint the Borg to a Presidential Blue Ribbon Committee on the assimilation of aliens in the country. This is something the Borg know something about -- the assimilation of large numbers of people and cultures which do not want to assimilate." "They can't speak, Spanish, Russian, Nigerian or any other language, but they can really get in your head!" Rove said.