UnNews:Blacks back Obama; say it's okay for him to be gay 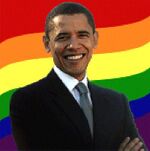 ARDMORE, PA – Black African-American men say they don't care whether President Obama “be black, green, purple, or gay, as long as he take back the White House in 2012.”

“We got his back,” Dorsey Jonesing say says. A barber, Jonesing has been cutting black men's hair in Ardmore, PA, for years, and, he says, he has his thumb on the pulse beat of his clientele. “I know what they think, and they say whatever it take, as long as Obama be reelected come 2012.”

Many political pundits have supposed that the president's recent admission of his homosexuality might “rub blacks, especially black men, the wrong way,” the Reverend Al Sharpton told television show host Bill Maher, “but what they don't know is that many black men are on the down-low.”

“On the down-low” is a slang expression that closeted gay men in the African-American community often use to indicate that they are secretly open to same-sex sex, Sharpton explained. “They want to be with other men, but they don't want nobody to know that they want to be with other men, especially their wives, mistresses, or girlfriends, because being gay doesn't go down well with many brothers and sisters.”

Nevertheless, black men, including even the few who are exclusively heterosexual, remain committed to Obama, Sharpton said. “They want him back in the White House by any means necessary.”

One of the barber's clients, Leon Givens, echoed Jonesing's sentiments: “I ain't got Obama on no pedestal. He human, and that mean he not perfect, but who is? At least he have enough courage to be honest about who and what he be—he don't operate on the down-low.”

“You don't have to agree with him,” Jonesing said, of the president's unexpected confession, “just like you don't have to sleep with him. He entitle to his views, no matter how queer they may be.”

Nationally, however, Obama may have a problem with African-Americans, 61 percent of whom reject the idea of two men or two women atop the same wedding cake—or in the same marital bed. “It be vile, man,” Myron Washington, a garbage collector in South Central Los Angeles, declared.

“As a Christian, I got to answer to a higher power,” Byron Adams, a landscaper in Orlando, Florida, said. “My God don't swing but one way: he made Adam and Eve, not Adam and Steve, and I can't vote for nobody, black or white, who think it okay to second-guess the Lord, not even Obama.”

African-American churches have taken a strong stand against gay marriage, and many of their pastors have suggested to their flocks, as the Reverend Al Jackson did to his congregation at St. Peter's of the Snake-handlers, that “it be a sin to vote for anybody that want to overturn God's law.”

Jonesing said he realizes that, as a supporter of a president who supports gay marriage, “and a black one, at that,” he is in the minority. “But, as a African-American, I been in the minority all my life,” he added. “I voted for Obama once, and I'm Jonesing for the chance to vote for him again. He promised us fundamental change, and, I guess, that include evolution toward everyone marrying somebody of the same sex, just like Obama hisself has done.”

“Can I hang this poster in your window?” twelve-year-old Todd Lincoln asked the barber.

“What it say?” Jonesing asked the boy. He paused in cutting a client's hair to read the poster's message out loud. With a smile, he said, “Yes, son, you can hang that in the window.”