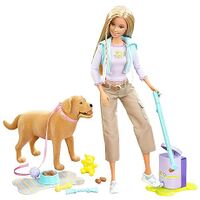 An early prorotype for ZimBarbie®, rejected as being "too American"

In a controversial move alternately described as "pure genius", "insane" and "cynical", Mattel®, the makers of Barbie® And Fisher-Price® toys, today displayed the latest incarnation of their smash megahit Barbie® doll lines. 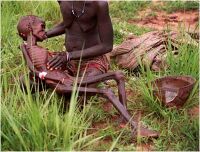 ZimBarbie®, soon in a basket-case country near you.

In an attempt to cater to the emerging African market, and also to appease increasingly militant African-American preteenage girls, this latest toy will be black. This in itself is not new or unusual; there have been black Barbie®s before (although none of them were commercially successful).

The latest Barbie®, however, is differentiated by its accessories, and by a catchy name that will clearly distinguish it from its honky counterpart. The accessory choice is particularly applauded by industry analysts: "This is sheer genius," said Anny Tapiss, speaking on national television. "The customer will pay more, receive less, and they will love it!" The "fashionably slim" build of the doll was also applauded, although one commentator described it as "emaciated".

Mattel® explain the accessory set and the name choice in their press release: "The new Barbie® will have no clothes, no handbags and no shoes. She will have no car, no house, no stove, no food and water and no sanitation. She will be called ZimBarbie®."