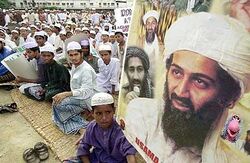 One of dozens of spontenous protests in favor of the release of the Mokey plush that have sprung up around the Moslem world.

Some Cave Somewhere -- On August 10, 2006, at 18:00 UTC, the Arab television network, HBO, broadcast excerpts from a videotape of Osama bin Laden addressing the people of the United States, in which he, strangely, demanded the release of a Mokey plush.

This development has led commentators to speculate that bin Laden may have lost his mind, although some have concluded that he has simply abandoned his ambitious geopolitical goals, and is just attempting to "think outside of the box" and see if he can actually get something he wants, by asking for something a bit less weighty than undisputed Arabic hegemony in the Middle East.

Osama said through an interpreter today, "Praise be to Allah who created the creation for his worship and commanded them to be just and permitted the wronged one to retaliate against the oppressor in kind. To proceed:

What is up with no new Mokey plushes? There's new plushes for everybody but Mokey. They even had time to make a Fraggle version of UNO, a game nobody even plays anymore except drunken infidel american college students. This is not acceptable."

bin Laden went on to note that the classic Mokey plushes from the 1980s were "beneath contempt" in the eyes of his many followers around the world, all of whom "were prepared to complain on the internet" until their silly quest was victorious. 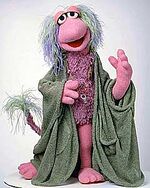 "Trust me, we will annoy millions of Americans until the Mokey plushes are ours" said bin Laden. "We will not sleep until we have won this war against the infidels who think Red is better than Mokey."

President Bush's reaction to the video was swift and decisive: "We now know not to trust Mokey, with her terrorist buddies." said President Bush. "You can't intimidate us, Osama, we all know that this video is just a ruse so you can divide America with a flame war over who is hotter, Mokey or Red. And besides, we all know that nobody cares about that new agey liberal commie hippie Mokey anymore, anyway. Give me Wembly any day, thank you very much."

According to uncyclopedia's staff reference librarian, all of this fuss apparently stems from some 80s television show about a tribe of rat people who live in a magical cave.