UnNews:Bin Laden and 80,000 others killed 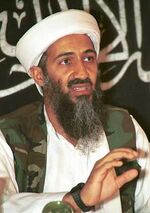 Osama bin Laden, pictured, among the thousands of people killed by U.S. gunfire in Pakistan and Afghanistan

ABBOTABAD, Pakistan - U.S. President Barrack Obama last night confirmed that Al-Qaeda leader Osama bin Laden was among the approximately 80,000 people killed in the ongoing military operations in Afghanistan and northern Pakistan. Speaking in a late-night television address to the nation, Obama announced that bin Laden, the mastermind of the 9/11 terrorist attacks, was one the individuals killed in one of the countless military operations that have taken place in the region since the 2001 U.S.-led invasion.

The president said U.S. intelligence operatives received a tip in August on bin Laden’s whereabouts, which in this instance turned out to be correct, and which ultimately lead to Sunday's attack. By Sunday morning, he had authorized “a small team of Americans” to conduct an operation targeting bin Laden. “After another of the innumerable fire fights that have become a feature of life in the region since the beginning of Operation Enduring Freedom, they killed Osama bin Laden and took custody of his body,” the President said. “No Americans were harmed and they took care to avoid civilian casualties, on this occasion at least."

The announcement marked a formal end to the manhunt for the most visible and emotionally-charged symbol of the terrorist attacks of Sept. 11, 2001, in which 3,000 civilians - approximately one twenty-seventh of those killed in Afghanistan - were killed. "Justice has been done,” Obama said, "at least in this one specific case."

Thousands of Americans gathered outside the White House and at Ground Zero, many waving American flags, beeping car horns and cheering and chanting "USA, USA, USA," to celebrate the killing of someone who definitely deserved it this time.