Lake Washington, Washington: Bill Gates is in intensive care at his private hospital after being viciuosly attacked by a virus at around 3pm today. His private doctor, Dr. N. Anti-Virus said that the virus which attacked Gates was most probably the MsSod virus. 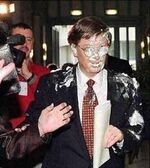 Bill Gates yesterday at Microsoft, foaming at the mouth, nose and eyes.

As a pre-attack by the virus, Gates yesterday experienced foaming at the mouth, nose and eyes, while at a meeting at Microsoft. Gates was rushed from there to Dr. A. VeeGee, who failed to see what the problem was. After the foaming having being dismissed by the docotor as just a "hoax", Bill returned to his house via his private jet. At 3am the next morning, Bill was attacked by the virus.

The MsSod virus (Win32.StupidSod.Virus) is said to cause the symptoms Mr. Gates was experiencing at the time. The virus first infects the main drive, replicates itself with the inconspicous name of "white_blood_cell.exe", and then attacks the victim.

Dr. N. Anti-Virus said that some symptoms Bill was subject to was constantly falling asleep and then re-awaking, not responding to any commands given to him, and constantly whining about a missing Dll.

"Mr. Gates has been severely affected by the virus, and we are all determined to delete it out of him.", the doctor said.

The doctor and his team of Anti-Virulists are prepared to work overtime to try and remove the virus from Mr. Gates. They say that they will not give up hope and reformat the man.

"We will not give up hope on Gates. We will only format him if all other options fail."

Breaking News: Bill Gates is now in a critical condition, after everyone was warned about it when he emitted a critical error dialogue box. The dialogue box, our correspondent told us, appeared just as Mr. Gate's doctors were about to re-install some of Mr. Gate's vital organs.

Bill Gates is in a critical condition, after giving out this critical error.

Mr. Gates is currently under the operating table, while his doctors are working furiously trying to remove the virus. Dr. N. Anti-Virus commented:

"It seems that the virus was set to attack again once one of its files had been deleted. It has put Bill in a critical condition, and we are trying to get him into a more stable condition. So far, though, we've had nothing.

Bill Gates has had a reputation of being subject to virus attacks, and was said to have become immune to most viruses, through his new technology advancements, and paying other companies to make him a better vaccine.

More on this story, as it continues.