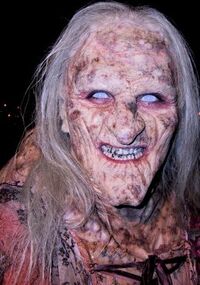 Emily, shortly before she was "cast into the fires of hell"

UK BIG BROTHER CONTESTANT EMILY PARR has been removed from the Big Brother house and burnt at the stake for comparing another housemate's features to that of a lion and also for practicing Satanic rituals under her duvet. The 19-year-old was taken out of the compound and was summarily burnt at a stake before a rabid crowd who were baying for her blood.

A spokeswoman for Channel 4 said that the decision had been taken because "the practice of witchcraft in the house is something that has been expressly forbidden in our rules.".

Channel 4 said the contestant was seen evoking demonic spirits last night and was immediately reported to senior production staff. After becoming possessed with a primordial pirate demon ghost Emily said, in ancient tongue, to fellow house mate Charley Uchea, "Actually you DO look a bit like a lion?". Ms Uchea was, coincidentally raised by a pack of lions up to the age of 17.

In consultation with broadcast executives, the decision was taken to remove Emily from the house and have her put to death with immediate effect. She had breached strict rules governing contestant behaviour and had also opened up a vortex into the underworld that, "threatened the very existence of our own universe!".

Shortly before she was tied to the stake and placed atop a bon-fire Ms Parr released a statement that said, "I very much regret indulging in satanic rituals within the house and would like to assure the makers and producers of Big Brother that I bequeath a curse to befall all of you and thereafter ten score generations after."

Angela Ninconpoop, head of the Big Brother commissioning team, said: "Comparing someone to a lion and evoking demonic spirits is clearly offensive and there was no justification for its use."

Ms Ninconpoop, shortly before weeping pustules erupted about her face, said that the decision had been taken in the wake of the flaying and dismemberment of Bollywood star Shilpa Shetty on Celebrity Big Brother by evil psychopath Jade Goody earlier this year. It later emerged that Jade had been instructed to commit these acts by Satanic minions that had been summoned by fellow house mate Leo Sayer.

A spokesman for the Campaign For Witchery said: "Whichever way you look at it, witches and warlocks do seem to be getting a raw deal these days."