UnNews:Biden on sexual assault allegations: 'They're not true' 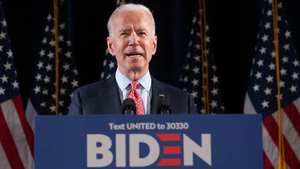 Biden (pictured) was pressured by his advisors to state that the allegations are false and fictitious.

WASHINGTON, D.C. -- Addressing allegations by Tara Reade that the Democratic presidential candidate sexually assaulted her during her time as a Senate aide, Joe Biden responded after weeks of silence on Friday by telling reporters, “My advisors told me to say they aren’t true.”

“I want to be clear: my campaign staff explicitly told me to claim this never happened,” said Biden, who appeared on MSNBC to share what he had rehearsed with his team of highly paid campaign strategists and PR professionals. “After consulting with the best legal team money can buy, I’ve decided to state this unequivocally did not happen. I want the American people to know that internal polling has shown I should forcefully deny this and move on. I hope I can dispel any doubts you still might hold that I would go against my advisors’ wishes and confirm this happened.”

At press time, Biden had called upon the National Archives to release any documents they had that might support Reade’s allegations after his advisors had confirmed they didn’t exist.

The National Archives were approached for questioning but declined to comment.