UnNews:Bezos blasts off and returns 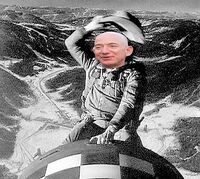 Jeff Bezos rides his rocket around the Earth.

HOUSTON, Texas -- Space explorer Jeff Bezos zipped around Texas's atmosphere on the maiden flight of his rocket JeffB14U1 this week. With a hand-picked crew of three, including his own brother Mark, the spaceship did one quick orbit around the Lone Star State before floating back to Earth. To mark his thanks to Texas for putting up with his mission, Bezos wore a Stetson, similar to the one seen in the film Doctor Strangelove by actor Slim Pickens.

"I wore the hat in tribute to Texas and Slim," said the billionaire founder of Amazon. "It was seeing Slim riding a nuclear bomb at the end of the film that inspired me to go into space when I had become super-rich. Thanks, Slim, for the inspiration."

The Blue Origin flexing in flight.

The JeffB14U1 (formerly known as Blue Origin) reached a height of 106 km above Earth's surface. The main part of the rocket (batteries included) reversed thrust to land back on the launchpad while the capsule containing Bezos and his crew came down separately via parachute. Pictures of the rocket showed it flexing in the Earth's atmosphere, but this is regarded as normal for spacecraft like the JeffB14U. Bezos said his trip showed that anyone can reach for the stars, as long as you have a monopoly business and oodles of income.

"Space travel will be first adopted by the wealthy," added Bezos. "Like the automobile when only the rich could afford one or in the early days of manned flight, what I am doing will become normal by 2050. By then, my descendants will have established Bezos City on the Moon. This is a great day for humanity. Mine, mainly."

Bezos didn't confirm when he was next going into space but insisted that if he does, he plans to return stronger and with enhanced powers of publicity. This will be the JeffB14U2.