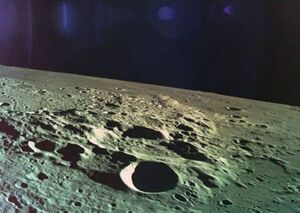 This photo is the only payback for 100 million simoleons.

MOON -- Israel's Beresheet spacecraft snapped a stunning picture of the lunar panorama moments before it crash-landed, though somewhat less stunning than the fact that it cost $100 million.

Israeli engineers and politicians were putting the best face on the dramatic waste of money on the part of a nation notoriously tight with it. The engineering team of SpaceIL said the crash will spawn comprehensive tests to gain a better understanding of the crash. Prime Minister Benjamin Netanyahu, who was in the Control Room when the mission ended, stated that "We will try again, and surely produce more than one photo next time." Netanyahu has tried the Prime Minister thing six times and is sure to show positive results this time. He applauded the engineers for reaching their destination and was sure the next effort would be more "comfortable"—as he himself will be when various indictments are sorted out.

Apollo 11 astronaut Edwin "Buzz" Aldrin also praised the mission. "Almost is not only good enough in horseshoes and nuclear war," he said, "it's pretty damned good in funding requests for follow-on missions!"

Beresheet, which is as close as Israelis get to an English obscenity for bovine excrement, was conceived out of the Lunar XPRIZE competition. Google promised $30 million to the first competitor to land a probe on the moon. Though there are many better ways to spend $100 million to get $30 million back, SpaceIL won't even get that, because Google's deadline was March 31 of last year. Nevertheless, Peter Diamonds, founder of XPRIZE, stated that "The mission not only touched the Moon, it touched the lives and hearts of an entire world, and without leaving comparable debris. The team's ability to fail for only $100 million is a leap forward toward an era when failure is totally affordable." XPRIZE awarded SpaceIL $1 million for the failed attempt, because it is based in San Francisco, where every child gets a prize just for showing up, unless Donald Trump sent them there as punishment for being a Sanctuary City.

Success would also have made Israel only the fourth nation to soft-land on the Moon, supporting the national goal of showing up the Arabs at every turn. "No, Gaza hasn't done it," Netanyahu said of the lunar crash. "The West Bank hasn't done it. Jordan? Feh!" There are no further reasons to do it, as neither Israel nor the Arabs have conflicting, centuries-old claims to the lunar surface to go to war over.

Beresheet experienced an engine problem seconds before the planned soft landing. Engineers stunningly restarted the engine, then glanced up to see 310 MPH on the speedometer just before the crash. Happily, a jarring screech and the sound of crumpling metal were not heard, due to the lack of air.