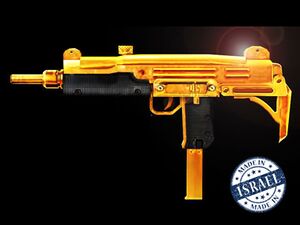 BEIRUT, Lebanon -- A gangster in this Lebanese city was absolved of accidentally killing his third wife when a temperamental Uzi in his possession unloaded in her face, local police said Monday. Godfather Abdullah Farid was dining with Ms. Fatima Noor and four others on Sunday when he took out an Uzi 9mm sub-machine gun, police said. Mr Farid, who was totally unaware the gun had bullets, was showing the nifty gold-plated weapon to his wife, even allowing her to peer down into the gun barrel, when suddenly the Uzi decided to fire an entire clip, blowing off her head at the shoulders.

“The gun seemingly had a mind of its own and may have been jealous of the man's wife and decided to suddenly take her out, leaving Farid shocked and rightly angry at the murderous machine,” Police Sub-Lt. Ahmed told CNN. “Who can ever hope to understand the motives of a murder weapon!”

Ahmed said that Farid had been separated from his wife for a while and they were currently in a court battle over his vast crime fortune. But none of that concerned the Uzi, which had no reasonable motive what-so-ever for shooting anyone.

Immediately after the cold-oiled gun murdered his wife, Farid subdued the belligerent weapon and stopped it from reloading and doing even greater mischief.

When police arrived on the scene Farid explained to them what had happened and he handed over the guilty party along with a thick brown envelope. The police took the package and the murderous Uzi into custody, and then compiled a report on the killing, carefully noting that Mr. Abdullah had permission to own such a weapon, although the gun had no right to discharge itself in public.

The newspaper said that Farid was so shocked by the shooting that he was unable to administer CPR to his dead wife, in part because her head was gone.

It is not clear why he was armed, why he took the weapon into the restaurant, why he was allowing his wife to examine the barrel, or whether he knew the gun was loaded and that it intended to hurt anyone. But one thing is certain: guns kill people and not visa versa.

The Beirut Post said the charges lodged against the murderous weapon by Mr. Abdullah carry a maximum sentence 10 years of hard-confiscation without oiling, plus an additional charge of attempting to frame Farid for the murder which also carries a possible downgrade to solitary confinement.

Back in the United States, pro-gun lobbyists used the incident to argue that assault rifles are safe to show your wife, and this killing was simply an isolated case of a lone gun gone wrong.

Meanwhile the corporate media – with the exception of Unnews – have all been pin-drop silent on the genuinely contentious issue of the guilty Uzi being an Israeli residing illegally on a foreign planet.