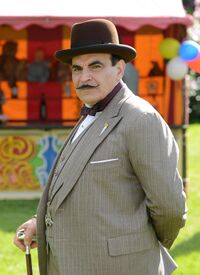 Hercule Poirot:'I will find the bombers'.

BRUSSELS, Belgium -- Belgian police have enlisted the help of Hercule Poirot to find those behind the bomb attacks in Brussels on 22 March. Relying on their connections to the British Secret Service via The Thompson Twins, the semi-retired Poirot has agreed to help out with his "little grey cells."

A long-time resident in London and posh country house parties, Poirot made his name investigating crimes of passion and blackmail. However, this will be his first investigation connected with terrorism.

"I am looking forward to this case," said Poirot at a press conference in the Savoy Hotel. "I want to help the country of my birth, and it will be a change hanging around with wealthy dowagers and handsome young men with slick hairstyles and sharp suits. I have asked the Belgian police that I be allowed to conduct the case at my own pace. About a three-part TV mini-series should suffice."

Poirot will be assisted by Belgium's famous literary heroes — though he has ruled out working with Tintin, as he is allergic to journalists and Scottish terriers.

Belgian artist Rene Magritte provides a painting of one of the suspect terrorists.

"I trust I can deliver very quickly on my verdict. I will ask all those involved to meet me in the library, where I will unmask the terrorist villains. The result might be a bit too surreal for some tastes, but we are in Belgium, after all. Anyone like a chocolate?"