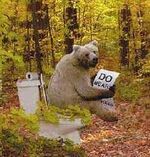 A bear quietly waits for its human prey to pass by.

The bill, originally proposed Senator Mark Pryor (AK), was written in order to ensure that no longer would bears be depicted in the media as adorable, loveable creatures, and rather the vicious animals that they truly are. "I will not stand for this cute depiction of bears," he stated on August 6th, "Should despicable, bear-approving shows like the Care Bears continue to sway our children to the wrong side, we will surely be faced with a bear flooding within the next few years."

While Senator Pryor's extreme position on the scariness of bears was originally questioned, more and more support for his side grew as information about bears became available to the public. Using this information, Senator Pryor quickly constructed a small set of facts that have been subsequently posted throughout the nation, and read as follows:

Despite this undeniable fact sheet, fellow Congressmen and Senators argued that not all bears were quite as frightening. "What about panda bears," asked Dick Durbin (IL), "surely, they are the cutest bears mankind knows. They are usually harmless and not in the least bit frightening. This broad statement about all bears is purely racist in nature. Or animalist. I'm not sure what the word would be to describe it, particularly, but it's not good."

Though the bill suffered from these poignant rebuttals, both panda-excluding amendments and the extremely positive endorsement of presidential hopeful John McCain ensured the nearly unanimous passing by Congress. In accordance with the new bill, citizens are now required to not approve of bears by any means.

"Saying that bears are fuzzy-wuzzy, or perhaps just 'so darn sweet', is now against the law," explained President Bush in a national address. "These words fail to describe the pant-wetting terror that is bears, and should not be allowed in our beautiful country of peace, love, and prosperity."

Added Bush, "Should the bears refuse to cooperative with our demands, we will be forced to invade whatever nation is it bears come from. Is it the nation of, uh, forests? I'll bomb 'em till there ain't no more bears left."

Bears themselves have been forced to retreat into hiding, though not before issuing their formal account of the events of this bill. "We feel as though we have been unjustly prosecuted," said a lead bear representative in a note scrawled in jelly left on the steps of Congress. "All we wanted was your pic-a-nic basket."