UnNews:Battletoads rereleased due to overwhelming demand 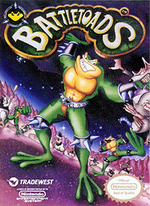 Chicago, Il In light of the unexplained huge popularity of the game, Battletoads has been rereleased and is available at Game Stops nationwide. The long discontinued game was brought back to store shelves due to a huge swelling of grassroots demand for the game.

"We just noticed literally thousands of calls asking for battletoads" said Mike Mikeson, president of GameStop. "You just can't ignore a hot game in heavy demand like that. We expect to make a ton of money off of this wise decision."

Can't go wrong with a surefire business plan like that. Buy gamestop stock now before the cool kids get it all!