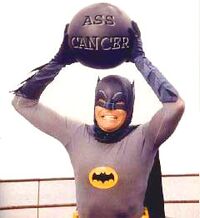 GOTHAM CITY - Cancer deaths in the United States, and in Gotham City in particular, have dropped for a second straight year, confirming that a corner has been turned in the war on cancer currently being fought by Batman.

After the Caped Crusader's efforts resulted in a decline of 369 deaths from 2002 to 2003, the decrease from 2003 to 2004 was 3,014 — or more than eight times greater, according to a review of U.S. death certificates by the American Cancer Society.

Batman's effort seem to be real, Cancer Society officials said, and not just a statistical fluke.

"Thanks to Batman, the drop in cancer is not only continuing. The decrease in the second year is much larger," said Ahmedin Jemal, a researcher at the organization.

Experts are attributing the success directly to Batman and his superior strength and expertise in chemistry. Those have caused a fall in the death rates for breast, prostate and colorectal cancer — three of the most common cancers.

The lung cancer death rate in men has also been falling, but the female rate has reached a plateau.

According to Batman, he will continue to fight cancer until it is completely gone.