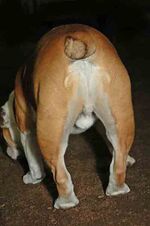 Last photo of 'Davey' before he disappeared.

United States President Barack Obama has reported his favourite dog Davey missing after he took him for a walk in the White House gardens. Holding an empty collar, the puzzled president asked for any news on the limping bulldog.

"Davey was with me earlier with my French poodle Frankie but when I looked around, Davey had gone. This is the first time he has just left without so much as a bark, whimper or yelp. I got him in 2010 after I had to put down the Scottish terrier Gordon for biting. Davey has never wandered off before."

White House insiders say Davey was last seen running in the direction of a thin faced mongrel called Assad who has been fouling the pavement outside the White House gates for the last couple of years. Obama had called his name but so far Davey has not returned. Now a reward for news of Davey has been posted online, with free dog biscuits for a year if the finder has a dog.

President Obama added: "I can carry on with my walks and I am sure my other pets will track down that evil mongrel. Isn't that right Frankie? Frankie?? ... Now where has he gone???"